LiftWeb makes building dynamic websites extremely easy whilst hiding away a lot of the plumbing. RxScala is a Scala adaptor for RxJava, “a library for composing asynchronous and event-based programs using observable sequences for the Java VM”.

This blog describes how we combined Lift and RxScala for event-based UI components consuming and producing observable sequences.

The original motivation for combining Rx and Lift was simply as an experiment - could we treat UI components as sources and sinks of Observable streams of values.

The idea proved to be quite successful, particularly when the backend system is built with Rx so there is no impedance mismatch. We ended up using these ideas for a greenfield project in a large financial institution in London.

To try all the examples in this blog, clone RxLift, and assuming you have SBT installed, type the following on the command line at the root of the project:

There are several fundamental ideas illustrated in the following figure: 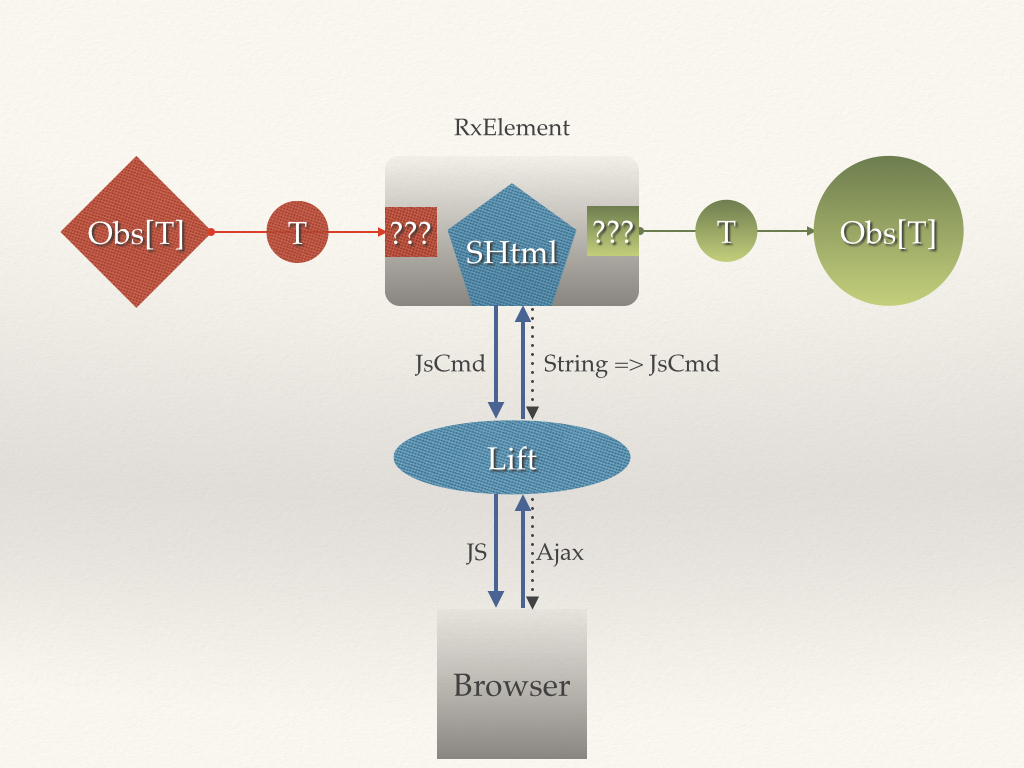 The are two fundamental data types:

RxElement.values is the output stream of values, the jscmd is the stream of Lift JsCmds containing JavaScript to send to the browser to make whatever changes are required in response to the input stream, and ui is the HTML to bind into templates as usual in Lift.

To send the JsCmds emitted by RxElement.jscmd to the browser, each JsCmd needs to be sent to a comet actor that forwards it to the client.

RxLift’s RxCometActor wraps up the mechanics of sending JavaScript to the client and managing subscription to the observables where necessary. Here is the code which should help your understanding of what is to follow.

The simplest example to start with is a text label since it maps an Observable[String] to a stream of values pushed to the browser.

That’s it! The two lines of interest are the construction of timeLabel and the call to publish, the rest is vanilla RxScala or Lift. Components is a collection of reusable UI components I’ve supplied, and publish is a method available via RxComentActor.

The label above doesn’t emit anything so here is an example of an input element, whose values are emitted as an Observable[String].

To get values from the input field, subscribe to in.values which is an Observable[String].

So far we can build UIs for simple streams of values. How can we build a reusable UI component for an Observable of some richer structure?

The solution we opted for was to use Scalaz Lens. The input Observable is mapped to Observables for each field with a set of lenses. But the complication is how to apply values emitted by each field’s component to the original data. The set of Observable values need to be combined in some way to effect a change on the original value.

We addressed this by mapping each field’s Observable to an Observable[[Endo][T]], where T is the type of the composite datatype (an Endo wraps a function of T => T). The set of Observable[Endo[T]] for each field can be merged and applied to the original datatype.

I think this is one of those cases where code speaks louder than explanations.

Here is a model and an RxComponent for the model.

An RxElement is the result of applying an Observable to an RxComponent, so it is not possible to modify its input after construction. RxComponents allow us to map and transform Observables before their RxElement is produced.

The last line, fn + ln, combines each field into a RxComponent[Person, Endo[Person]] by merging the Observable streams of fn and ln, and joining the UI NodeSeqs.

Consequently, a change in any field will result in an Endo[T] being emitted and so multiple updates to a datatype by different users will be safe. One user’s update will not overwrite anothers unless the same field is modified simultaneously by two or more users.

Here is a UI that uses the component.

(The BehaviourSubject is a subject that emits the most recent item it has observed and all subsequent observed items to each subscribed Observer.)

Building reactive UI components based on RxScala and Lift has proven to be fairly straightforward. RxLift is an example project illustrating the basic ideas which have been used to build a fairly sophisticated UI in a large financial institution in London.

Looking for a Scala job?

Keep up to date! Subscribe to our newsletter for the latest Scala news.

No spam. Unsubscribe at any time. We do not share personal details with third parties.

Browse old newsletters to see what you'll get